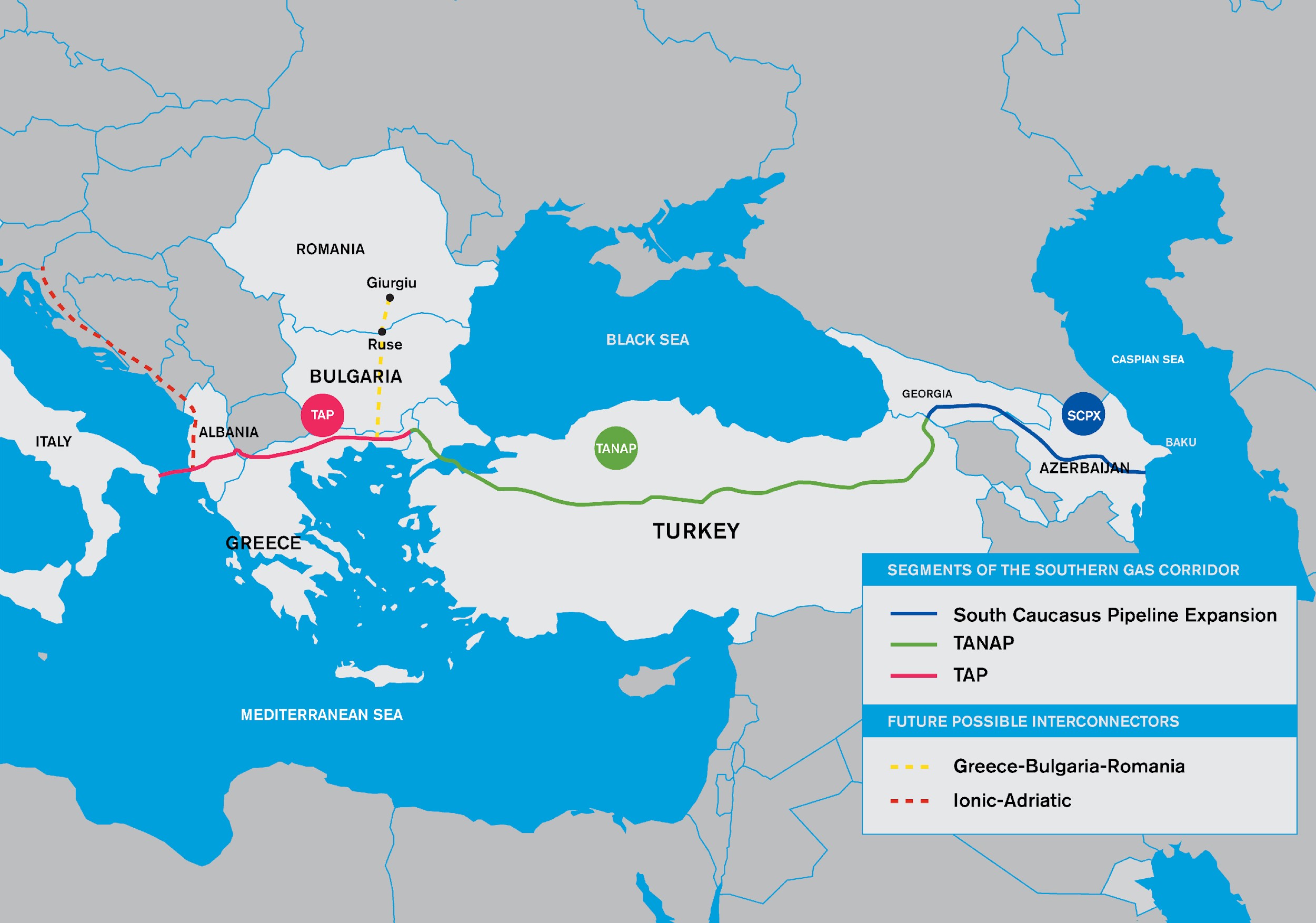 Southern Gas Corridor SGC – a mega-project of Azerbaijan and EU.

This is one of the largest projects to diversify European energy sources. Through the Southern Gas Corridor project, SOCAR is contributing Europe’s growing gas demand with Azerbaijani gas via alternative pipelines. The $40 billion mega-project connects the Caspian region with south-eastern Europe and promotes the economic development of both Azerbaijan and the transit countries.

3500 kilometre natural gas pipeline connects 7 countries from Azerbaijan to Italy. In addition, 11 internationally operating companies and 11 gas wholesalers are involved. Alternative energy suppliers such as Azerbaijan are expected to create a competitive environment in European market. The Southern Gas Corridor created new jobs to over 30 000 people.

The investment decision for the Southern Gas Corridor was made in 2013 together with SOCAR’s partners. The project started with the signing of 25-year gas sales contracts with European gas distribution companies. The construction of three interconnected gas pipelines across continents with a total length of 3,500 kilometres was a highly complex challenge. Now the mission is accomplished – Azerbaijan’s natural gas has arrived in Europe by the end of 2020. It comes from a new source via an alternative route and will contribute to European energy security. There is expected to be a growing demand for additional gas volumes on the European market due to the constant local production decline. The gas from Azerbaijan will contribute filling this gap for the next decades and the importance of cooperation between the Old Continent and Azerbaijan will increase

The importance of this project for Europe is additionally based on the practical implementation of the EU strategy to ensure the diversification of energy supplies to Europe using alternative transport infrastructures and is therefore an important contribution to European energy security. What is special about this project – it is not only another diversion of existing supplies. This is the first project in decades that will really bring new gas supplies to Southeast Europe. The construction of the Southern Gas Corridor has the advantage of allowing the EU to diversify its sources of gas supply. These strategically planned measures will reduce the potential damage in the event of a technical failure or politically motivated interruption of supplies from one to few sources and improve competition.

Azerbaijan and SOCAR are proving that they are reliable partners for Europe with the timely completion of the Southern Gas Corridor in December 2020 and will play an important role in supplying gas to Europe as supplier with growing export potential of the much-needed commodity in an environment of rising energy prices.

The Trans-Adriatic Pipeline (TAP) has been granted Project of Common Interest (PCI) status by the European Commission, Parliament and Council. This 878 km pipeline has an annual capacity of 10 bcm, but can potentially transport 20 bcm of gas per year. Its cost is €4.5 billion. After its completion, the TAP was connected to the Italian natural gas grid. Importantly, the gas transported through the TAP will have the possibility to reach other European destinations via Italian gas exit points. The following companies are shareholders in TAP: SOCAR (20%), BP (20%), Snam S.p.A. (20%), Fluxys (19%), Enagas (16%) and Axpo (5%).

The Trans-Anatolian Pipeline (TANAP), which runs across Turkey, is even longer (1,850 km) than the TAP. The construction cost was $6.5 billion and the pipeline will transport 16 bcm of gas, but has the potential to increase the volume up to 31 bcm. TANAP’s shareholders are: Southern Gas Corridor (51%), BOTAS (30%), BP (12%) and SOCAR Turkey Energy (7%). TANAP connects with SCPX on the Turkish-Georgian border and with TAP on the Turkish-Greek border.

Finally, but no less important, the South Caucasus Pipeline (SCP) connects Azerbaijan and Georgia. The current annual capacity of the SCPX (SCP extension) is 24 bcma per year.

The successful implementation of these projects was a top priority for SOCAR. The Southern Gas Corridor can be connected to existing and planned transport infrastructure in South-Eastern Europe and the Balkans, which would create further opportunities for this part of Europe and open the region to new sources of supply. In particular, the Greece-Bulgaria and Turkey-Bulgaria interconnectors and the Ionian-Adriatic Pipeline are of interest to the key actors involved.